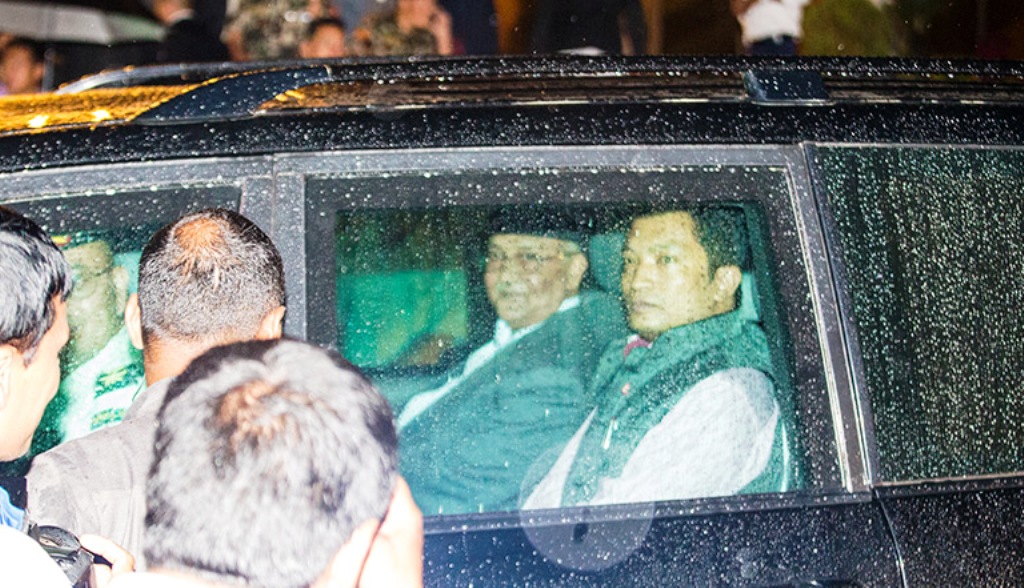 Nepal’s Prime Minister KP Oli, centre, walks out from the parliament after announcing his resignation in Kathmandu. (Reuters)

Nepal’s Prime Minister KP Oli’s resignation on Sunday evening shows clearly the limits of ethnic majoritarianism and ultra nationalism in an ethnically diverse and politically fragmented country. It opens the doors for national reconciliation between the hills and the plains, after a deeply polarised and divisive period presided over by Oli.

It marks India’s comeback in Nepali political landscape, after being unable to shape political outcome over the past year. And it also shows to China the difficulties in micro-managing a diverse, plural democratic landscape in South Asia.

Yet, many challenges abound, including the amendment of the constitution which will pave the way for Madhesi accommodation in the national political mainstream.

Here is the context.

India has historically exercised influence in Nepali politics, including during moments of regime change. Delhi mediated a political deal between the democratic parties and Maoists to wage a joint struggle against an autocratic monarchy, and embark on a peace process ten years ago. India has been deeply involved in this process – from helping draft an interim constitution, draw up a peace accord, facilitate the integration and rehabilitation of Maoist combatants, and in government formation processes. The end goal of this process was the writing of an inclusive, federal, democratic, republican constitution.

But over the past two years, the dynamics have changed.

Nepal’s political elite began pushing a constitutional draft that would have left the Madhesis, as well as other marginalised communities of the country, under-represented in political structures. It carved out a federal model which would ensure the dominance of the hill upper caste communities. It diluted affirmative action and drew up draconian citizenship provisions. The Madhesi forces of the plains bordering India were unhappy.

Delhi was uncomfortable. It realised that Madhesi discontent would spill across the border and feared a Sri Lanka-type situation. PM Modi told Nepal’s political elite that the constitution should be drafted through consensus, which would mean taking all actors, including the Maoists, on board.

But Nepali leaders, almost exclusively from hill castes, were keen to preserve their dominance. They saw this as an Indian conspiracy to increase its control. They disregarded both Indian advice and Madhesi protests and pushed a constitution forward in September, 2015.

The Madhesi protests escalated after the constitution. The state was brutal and killed over forty protestors — this fed to further alienation. Tarai’s parties used the only strategic lever they possessed — access to the open border. They closed the border in order to disrupt flows to Kathmandu and generate pressure on the establishment. This came to be known as the ‘blockade’ — it was not, as many in Kathmandu insist, India-imposed. But it was India-supported.

Kathmandu’s politicians then turned this into a battle of sovereignty and nationalism. Instead of addressing internal issues, they externalised the blame. They manufactured an extreme form of nationalism, which saw India externally and Madhesis internally as the problem and projected themselves as safeguarding independence.

The man who played a key role in this entire process was KP Oli.

This was a shock to the Indian establishment, for Oli had been one of Delhi’s favourites. He had pushed a hydropower agreement with India in the mid-90s. After the Maoists came overground, India developed a troubled relationship with its chairman, Prachanda. Delhi saw him as committed to establishing an authoritarian state — to counter this, it built up other communist leaders, particularly Oli, to weaken the Maoists. Sources have told HT the Ministry of External Affairs and Research and Analysis Wing funded projects in his constituency, took care of his health treatment in Delhi, and supported him in intra party battles.

But Oli was ideologically a conservative. He did not respect Nepal’s diversity. He saw no problems with the exclusionary nature of the state. He was aligned with the military and business elite which did not want federalism. He was against reservations and told an Indian diplomat, “Will there be reservations in the cricket team? Will you go to a doctor who has come from a quota?” This sensibility was deeply unhelpful in managing identity conflicts.

Instead of listening to Delhi’s advice, he decided to transform his politics into majoritarianism, which rested on ultra nationalism, of painting India as the country out to ‘Sikkimise’ or ‘Bhutanise’ Nepal and deprive it of sovereignty. He also cast Madhesis as Indian agents. All this was music to the ears of hill conservatives.

India felt after the constitution promulgation that if Oli became PM, the ethnic conflict would only deepen in Nepal. So it encouraged the then PM and Nepali Congress leader Sushil Koirala to throw his hat into the ring. Koirala did so, but was unable to gather a majority. The Maoists and a major royalist party backed Oli to form a government of the far left and far right in Nepal. India was outsmarted but it had managed to break the elite compact in Nepal that lay at the heart of a divisive constitution.

In May, the Maoist chairman Prachanda decided to withdraw support from the UML, only to retreat the following day. There was a strong local context here. The two parties compete for the same base, and Maoists were worried with UML’s growing strength. Prachanda was also insecure of war time cases and felt Oli was doing little to protect him and his cadres. The opposition, NC, promised to make him PM. India was instrumental in encouraging these conversations — it saw Oli’s exit as essential to a constitutional accommodation.

But Prachanda changed his mind. As HT reported then, a key reason for this was Chinese advice.

Beijing has generally kept a hands-off approach when it comes to internal politics. Its core interest lies in ensuring Nepal does not become a hub of Tibetan unrest. But over the past decade, its engagement in Nepal has grown. During the blockade, Oli also signed agreements to enhance connectivity and import fuel from China. It is important to note these pacts are on paper. Geography, costs and logistics still make India Nepal’s natural economic partner.

But at a time when India China ties are generally tense, and Beijing is expanding its footprints in South Asia, Nepal was an easy case. It had friendly government. President Xi Jinping was scheduled to visit in October. And Chinese diplomats urged Prachanda to stay on, maintain ‘left unity’ and support Oli. He blinked. Oli was emboldened. He blamed India for trying to destabilise him, secure in China’s support. He also recalled Nepal’s envoy to India and cancelled the president’s visit to Delhi.

India at this stage had a choice. It could have become aggressive, sent signals of displeasure, and become more actively hostile. But under flak domestically for mismanaging the Nepal relationship, the government decided to bide its time. On surface, it kept up the pretence of normalcy.

But it waited for Prachanda. Known as vacillating in temperament, Delhi kept nudging and encouraging Prachanda to think of where his interests lay. Prachanda had come to prominence as a champion of the marginalised – but now he was seen as having suppressed their aspirations. He could see a chance at becoming PM and managing insurgency cases. He decided to take the leap and withdrew support last week. On cue, NC decided to back him. Both parties committed to addressing Madhesi concerns. The Madhesi parties too declared they would back him.

Oli was gradually isolated. He sought recourse in constitutional ambiguities but even his party did not fall for it. Eventually, the PM decided to make a ‘nationalist’ speech, project himself as a victim of conspiracies rather than introspect about his failures and resign.

This is not the end of Nepal’s troubles. To get Madhesis onboard, the constitution needs to be amended which needs a two thirds majority. With Oli in opposition, that will not be easy. The country also needs to hold three elections in the next 18 months -which again needs inter party cooperation.

Nepal will now have a 24th PM in 26 years. It is an irony that India in 2008-09 played an active role in ousting Prachanda as PM when he sacked the army chief — in the process, Oli was a key ally. Today, to oust Oli, Delhi has engaged closely with Prachanda.

But beyond these games, the test will be if the next Nepal government brings back inclusive democracy and the country’s relationship with Delhi back on track. For Delhi, a nightmare in Nepal ends. It will now have to build back bilateral ties, while discreetly pushing for political inclusiveness. And for Beijing, there is a lesson. Unlike one-party systems, democracy can be messy and political permutations change. It has some way to go before it can compete with India’s natural advantages in the Himalayan states.